Phukrt and the Andaman sea 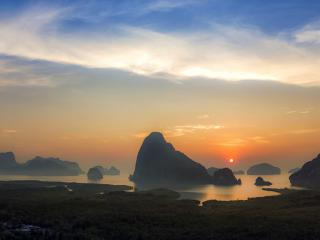 The Kingdom of Thailand

Thailand, an independent country in the middle of Southeast Asia, is an eclectic mix of 21st century development with deep roots in a 700-year-old culture — all combined with a happy-go-lucky way of looking at life.

Unlike its neighbours — Myanmar (Burma) to the west, Laos to the north, Cambodia to the east and Malaysia to the south — Thailand, with a population of around 60m, has never been colonised by a foreign power and, as a consequence, is fiercely proud of its independence and entrenched way of doing things.

Thailand is a constitutional monarchy and the King is highly respected by his subjects. Unlike in European monarchies, there are very strict laws in place that prohibit anything that could be considered an insult to his majesty or to the royal family as a whole; even casual comments that, elsewhere, may be taken as a joke can land you in serious trouble. Thais take their monarchy very seriousl...

One of the most popular tourism destinations in Asia, Thailand welcomes more than 5,000,000 visitors each year who come to enjoy a huge range of attractions, including ancient temples, beautiful white sandy beaches, idyllic deserted islands, raucous nightlife, rainforests, elephant trekking, white water rafting, yachting, golfing, scuba diving and more. Such is Thailand's appeal that regular return tourists and part-time residents make up a large part of the tourist numbers.

Trends in recent years have seen the 'second home' or 'retirement home' market in Thailand boom, as more and more people take advantage of the combination of high quality / low cost living that Thailand offers. Phuket in particular, with its combination of well developed infrastructure, laid-back lifestyle, idyllic islands and beaches — all combined with low cost of living — has seen a surge in the numbers of residential Phuket property sales to foreign nationals.

Bangkok and the regions of Thailand

Of Thailand's 60 million people, roughly 10 million live in the capital city, Bangkok. If you're visiting Phuket as an independent tourist, a few days stopover in Asia's liveliest, zaniest city is a must. Overhead skytrains and a shiny new underground train system have partly alleviated the effects of the city's notorious traffic jams. A wild mixture of risqu? nightlife, traditional floating markets, magnificent palaces and temples, street-side market shopping and food stalls and multi-storied designer emporia are just a few of the things that await. Bangkok is almost impossible to describe; and in many cases, seeing is definitely not believing...

Outside of Bangkok, Thailand has four regions — the north with its mountains and jungles, remote hilltribes and Thailand's second city — Chiang Mai; the agricultural northeast (Isan) — the provider of much of the country's unskilled labour force; the historically-rich and fertile central plains; and the south — with Phuket as it's jewel.

Phuket and the Andaman Sea

Stretching from Indian waters in the west to the southern tip of Malaysia in the east, the Andaman Sea is one of the world's most beautiful oceans — a delight of white sand beaches, swaying palms and crystal clear waters. While the whole western coast of Thailand faces the Andaman Sea, it's Phuket that is rightly called 'The Pearl of the Andaman' — and it's Phuket that has become Thailand's most popular beach tourism destination by far.

It doesn't matter whether your dream holiday revolves around deserted islands with pristine beaches, a fabulous array of dining choices, raucous nightlife, sophisticated clubs, fun-filled resort-style beaches or a more action packed vacation such as scuba diving, yachting or rock climbing — Phuket and its surrounding areas has it all. You can even come to Phuket and experience the thrill of racing in a yachting regatta — even if you've never sailed on a yacht in your life!

Although Thailand's Andaman Sea coast extends all the way down to Satun Province and the Malaysian border, our main focus is Phuket Island, Khao Lak, Phang Nga, Krabi, Koh Lanta and Koh Phi Phi — and the hundreds of other nearby islands that can be reached from Phuket.

From Phuket, you can explore by sailing or motor boat the fascinating and mysterious Phang Nga Bay and Koh Phi Phi (Phi Phi Island). Travel by road from Phuket and, in between one and four hours, you'll reach any of the accessible mainland destinations — including Koh Lanta via two short car ferry trips.

For more cool tips on avoiding the pitfalls and getting the most out of your holiday, read Phuket Travel Tips Why not pick up a couple of Thai words? See Speaking Thai

Phukrt and the Andaman sea